My attitude towards orange and yellow is changing. Every year I mellow a little and let a bit more into the garden.

Steve is a big fan of rudbekia. I wasn’t keen at first, but they do suit the softer September and October light.

Rudbekia and verbena bonariensis pair well. The verbena’s gone haywire this year. More on that next time.

So, on balance, I can tolerate some late summer yellow. In fact, I’ll admit that I’ve started to rather like it. But I’ve flatly refused to allow any orange flowers. Until now.

This spring I bought  a packet of helichrysum hendrix seed from Higgledy Garden on a whim. We’d just extended our two main borders and I wanted some cheap and cheerful annuals to pad them out.

Benjamin from Higgledy has a wonderful knack of making all his flowers sound like must-haves. But I went for these because he said they last well into the autumn, and for the past couple of years we’ve been making efforts to keep the garden in-flower for longer. I thought they might help.

OK, it’s a bit unruly. But we’ve never had this much colour so late in the season before.

And so they did. The flowers are quite papery and robust. I reckon they’ll last until the frosts, so we may get another month out of them yet.

Benjamin says helichrysum hendrix come in ‘an amazing array of colours’. He’s not wrong. We’ve had pinks, purples, whites, crimsons and combinations of those.

Dandelion yellow. It’s growing on me.

And we’ve had orange. I’d love to call it copper. Or burnished gold. But it’s just orange, isn’t it.

Orange. In my garden. I never thought I’d see the day.

The surprising thing is, I like it. But if I start considering regimented rows of marigolds for the garden next spring, tell me to have a word with myself.

In the mid 90s a lady called Nell commandeered a strip of ground on my parents’ nursery. She’d been a customer of theirs for years, and the community garden she shared with her neighbours was being reclaimed by the local council.

Nell was a quietly tenacious woman in her late seventies. Unfazed by the council’s decision she uprooted her entire garden and replanted it alongside one of my parents’ glasshouses. Once the job was done, she kept coming back. She walked the four mile round trip from her flat to her new garden almost every day until she died in 2001. Old Nell, as we fondly called her, became part of the family. And her coffee and walnut cakes became the stuff of legend.

For more than ten years Nell’s garden has been left to its own devices. But when we visited my parents on Mother’s Day, Mum sent me out there, spade in hand, to see what I could find.

It turns out many of Nell’s perennials are still thriving – they’re just long overdue a lift and divide. So I enlisted my Dad and Steve to help and we came away with quite a haul.

There was a wonderful collection of hellebores right at the back of the garden. They are healthy and vigorous with masses of flowers. We only took two for now as I’m not quite sure where I’m going to put them.

I think this one is ‘white lady’… 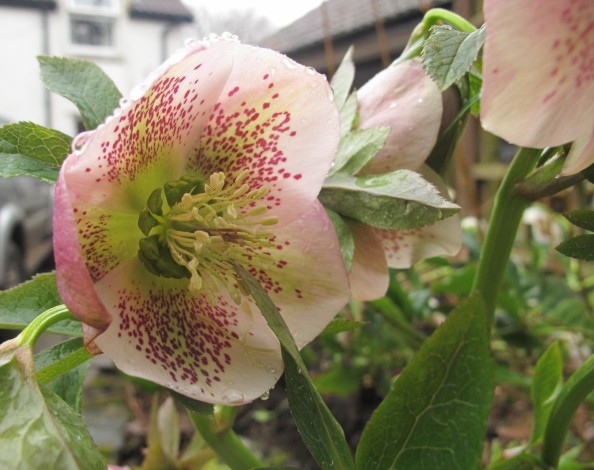 …and this could be ‘pink spotted lady’

Several dense clumps of snowdrops were just going over. Actually, dense is an understatement. One clump filled an entire crate once it was separated out. While I was digging I was half afraid I’d unearth a skeleton; Nell was known for picking up run-over cats and burying them with a handful of bulbs.

snowdrops in the green – seems greedy to keep all these, I’ll see if I can find good homes for a few

We found some more bulbs behind the hellebores. They have snowdrop-like leaves and the buds have a pinkish tinge. No idea what they are, but they look pretty. I’ll try to identify them once they open.

mystery bulbs – if you know what they are, please leave a comment…

Dad knows I have a thing for peonies and found this beastie for me:

I’m going to need a saw to divide this one

It really needs to be divided and, according to the RHS, this is best done in the autumn. I’m going to give it a go, but I doubt it will forgive me on time to flower this year.

We also have armfuls of cowslips and sedums. And Steve couldn’t resist a patch of monstrous rudbeckia. Judging by last year’s stems they’ll grow to a good seven foot. Who knows where they’ll go, perhaps they can plug a few gaps in the hedge.

Old Nell was quite a character and I remember her with much affection. I think she’d be glad to see her plants being given a new lease of life. 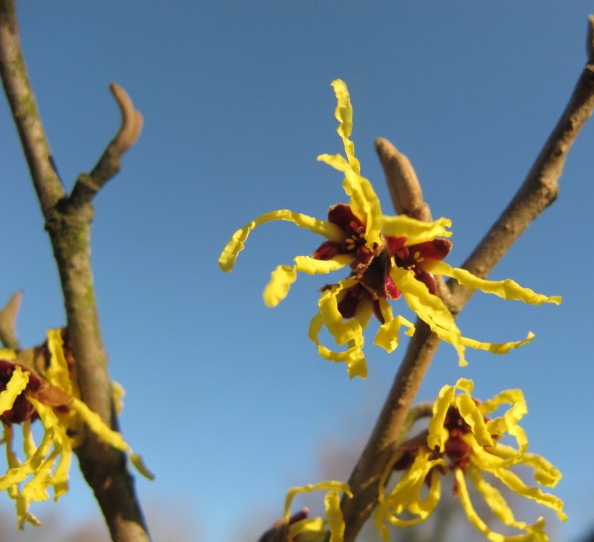 I can count on one hand the number of times Steve has given me flowers. But he redeemed himself this Christmas with three bare root peonies.

They arrived on December 18th. Luckily he realised they couldn’t sit around under the tree for a week, so I was given them early. I loosely covered the roots in compost and scribbled down the names ready to Google them on Christmas morning.

herbaceous and intersectional peonies can fail to flower if planted too deep – buds should be at, or just below, the surface

Tree peonies are actually hardy shrubs. They have woody stems and can be slow to get going, but eventually reach anywhere between four and seven foot high. Intersectionals are a tree/herbaceous hybrid, their stems die down at the end of the growing season but their leaves and flowers resemble those of tree peonies.

For days I deliberated over where to put them. Peonies are long-lived and the herbaceous ones aren’t too keen on being moved about. My usual ‘stick it in and see what happens’ approach wasn’t going to cut it.

peonies need little attention once they’re growing, but it’s worth preparing the ground well…we dug into our first ever batch of homemade compost for the occasion

In the end I split the three of them up. Border Charm has joined my existing pair of herbaceous peonies by the back door. Coral Charm and Karl Rosenfeld are thriving in this sunny spot. It’s already planted with crocuses too, which intermingle nicely with the bright red other-worldly peony stems that shoot up early spring. 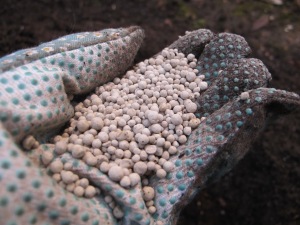 I chucked in a handful of lime for good measure; our soil is a bit acidic & peonies prefer it neutral to slightly alkaline

Emodii apparently tolerates shade pretty well, so I’ve put her under the apple and silver birch trees alongside a clump of Alba foxgloves. I feel a white theme coming on down here in the dappled light which I might take further this year.

I agonised over Akashigata. I made up, then changed, my mind three or four times. Tree peonies’ emerging buds can be frazzled by the sun on frosty mornings. Much of our garden is exposed to the east so my options were limited.

I stripped back an area of grass to put her in one spot. Then I remembered it was right in the path of our spaniel’s regular mad-dash garden circuit, so I had to think again.

In the end I put her at the back edge of an island border. It’s an obscure position for such a beautiful plant. But I hope she can quietly establish herself there without coming to any harm. It could be up to four years before she flowers and I think we’ll enjoy stumbling across her in full bloom one summer’s evening when we’ve all but forgotten about her.

If Steve gets really lucky, one of my new peonies might bloom in time for my birthday in June. He’ll never need to buy me flowers again.